This is the second article in an article series that will discuss the dependency injection and service locator patterns, explain how they differ, and detail the most prominent Multiplatform Mobile libraries and approaches to implementing these patterns. This article introduces the first library: Koin. You can find the first article in the series here.

Koin is a well-known open-source Service Locator dependency management library that has support for Android, Ktor, and Multiplatform.

Note that we are using a bridge from the iOS application to the iOS shared code to the initKoin function, which is unnecessary in the Android application.

In order to hook the user interface up to the search box implementation, it is necessary to inject the SearchBox into a user interface component. This is fairly straightforward for Android, but on iOS, we once again have to use a bridge from the iOS application to the iOS shared code, where the SearchBox is injected (notice also that the “bridge” is a KoinComponent).

droidcon
​​Koin is the Kotlin dependency injection framework well known for its ease of use and efficiency. It has been greatly appreciated by the Android community since 2017. In 2022, a new major version of the…
Watch Video 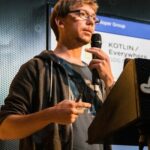 Koin is a lovely dependency management library for multiplatform development. I have developed a large-scale Android app with it, after finding that Dagger was too complicated for the team to understand (this was before Hilt). The team behind it is passionate and takes even harsh criticism from the community in their stride, taking it as constructive and using it to make the library even better. I have two examples of this:

Criticism 1: Since there is no compile-time check as with Dagger, it can lead to crashes when a needed dependency is omitted

While there is no way to make Koin a code-generating DI library, they took this criticism and introduced a way to check your module dependency graph during your unit testing cycle. This clever move allows you to make checking your modules part of your CI/CD pipelines and your app won’t hit production with such a blaring unit test failure, assuming you remember to add all your modules.

Criticism 2: All the calls to get() for long dependency lists quickly gets out of hand

In the versions of Koin before 3.2, long dependency lists meant long argument lists of get() arguments being passed mindlessly to constructors. But in version 3.2, a new constructor DSL was introduced that eliminated this problem. For example:

Now, imagine the benefit if SearchBox had several dependencies!

The remainder of this series will focus on the actual libraries and approaches for dependency management in Multiplatform Mobile, and will feature articles on:

This article was originally published on proandroiddev.com on August 31, 2022