Jetpack Compose: Adding a Hilt ViewModel to the Navigation graph

Jetpack Compose recently got released to production and its release was accompanied with great anticipation. This new toolkit helps developers accelerate UI development in a much simpler way, eliminating the traditional XML-based UI definitions.

The app in question is an MVVM (Model-View-ViewModel) application that makes use of Hilt for dependency injection as well as the Jetpack Navigation library for easy navigation between the different fragments.

The idea in Compose is to have what are referred to as Composables. These composables are annotated functions and are the fundamental building blocks in Compose applications. A composable, like a fragment or activity, can have a viewModel linked to it, this is especially important for having the viewModel handle state and not the composable itself.

To add the compose-based navigation dependency, the following is added to the app-level build.gradle file:

The setup of a navigation graph in Jetpack Compose is slightly different from the traditional setup found within a non-Compose app, for example:

where the NavHost expects two main parameters — the NavController and the start destination to be defined; and all the app’s composables (or screens) to be added to the navigation graph through the use of NavGraphBuilder.composable:

where “dashboard” is the route and “DashboardScreen(navController)” is the name of my composable function with the navController passed to it as an argument.

droidcon
When people start looking into the testing domain, very similar questions arise: What to test? And more important, what not? What should I mock? What should I test with unit tests and what with Instrumentation?…
Watch Video 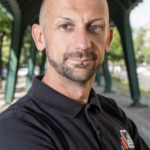 Unfortunately, because my viewModel is annotated with @HiltViewModel it could not be added to the navigation graph through the standard way as I encountered the following crash:

Basically, to be able to add my HiltViewModel to the navigation graph involves a different syntax. First, the hilt-navigation dependency needs to be added:

With this dependency added, the viewModel can be added using hiltViewModel whose documentation states:

My composable function DashboardScreen was then updated to be:

and the aforementioned crash was resolved.