SwiftUI vs Jetpack Compose by an Android Engineer

If you think it is a good idea to use Jetpack Compose (or any other multi-platform UI library like Flutter or React Native) to build an Android and iOS application, it is probably because you’ve never developed or used an iOS application before. That was my case not so long ago and it was definitely a bad idea.

Nice to meet you iOS

For a recent project, I created a mobile application for Android and, for the first time, iOS. My first idea was to wait for the compatibility of Jetpack Compose with the iOS system, but that was also the opportunity for me to learn SwiftUI and I chose this last option.

This project is a real application, not just developed to write this article. It’ll be used as the mobile application for the Devfest Lille, a French tech event in Lille. You can find the entire source code in this GitHub repository.

Now let’s go back to my story. Before I started to write my first line of Swift code, I took my wife’s iPhone to know more about the system. I was surprised to realize that there are a lot of differences between Android and iOS. Where in Android, we have Material and everyone can implement it like they want, on iOS you don’t have any choice. If you want to build an iOS application which respects the platform guidelines, you have only one way.

I started an exploration phase of the iOS system to know more about fundamental design principles and about the user experience on the navigation in order to understand the better approach to interact with components.

Differences between SwiftUI and Jetpack Compose

Compose and SwitfUI are both new declarative UI frameworks. Due to this paradigm, it is easy to develop with one of them if you know the other one. As an Android engineer, I develop a lot with Jetpack Compose and even if it was the first time I used SwiftUI and the language Swift, it was easy to get started. However, there are some key differences.

First difference is that SwiftUI is packaged with the OS where Compose is a library. Even if performance will be better with SwiftUI because it is pre-compiled in the system, I prefer the Compose approach. I know there is a better user adoption of new OS versions in the iOS ecosystem, but there are always two (sometimes three) versions in parallel. If you need a new feature in the framework, you need to wait for your project to configure the appropriate minimum version where you just need to upgrade the library version with Compose.

Second difference is that SwiftUI uses protocol implementation where Compose uses a compiler plugin and the composition. The composition is an elegant way to delegate a responsibility to another class but I’m forced to admit that the SwiftUI approach doesn’t require adding a Modifier equivalent to all my components.

Thirdly, maybe the worst idea but also the best one, is the strong coupling of SwiftUI with the system. Due to this decision, it is hard to write an application which doesn’t respect the design of iOS. With Compose, you can easily create a component which respects Material specifications but you need much more code to build an application with a beautiful UI.

This last point is a design decision from Google.

The reasons are good and understandable. With this design decision, Jetpack Compose is now multi-platform and can be used for desktop, web and soon iOS. But this decision is at the expense of a better experience for developers who build applications only for the Android platform.

Where is SwiftUI better than Compose?

Of course, this section won’t be exhaustive. I don’t know all things inside SwiftUI but I’ve a short list where I think that SwiftUI experience is insanely better compared to Jetpack Compose.

Previews are available in both technologies but with Compose and Android Studio, it is often broken (sometimes, you don’t know why) and you are quickly limited in possibilities. You can just preview a composable function which emits UI without any request call or a dependency to a ViewModel.

In SwiftUI and Xcode, it is much more permissive. You can interact with your preview and load data asynchronously. You don’t need to think about your composable architecture to get a preview. However, my application is pretty small and I’m curious to see SwiftUI previews with a large code base.

However, where you need to declare a dedicated component with Compose, it is a decorator with SwiftUI. You can call navigationTitle (and all variants) anywhere in your components hierarchy. That could be dangerous for complex navigation but Compose is worse. It is quickly hard to customize a toolbar shared between multiple screens if you are also using a bottom navigation.

SwiftUI implementation to declare a tab navigation and a toolbar.

Jetpack Compose implementation to declare a bottom navigation and a toolbar.

Using GraphQL in a KMM project with Jetpack Compose and SwiftUI

droidcon
In this talk John will show how GraphQL, using Apollo library, can be used in shared code in a Kotlin Multiplatform project with the UI developed using Jetpack Compose on Android and SwiftUI on iOS.
Watch Video

Using GraphQL in a KMM project

with Jetpack Compose and SwiftUI 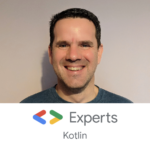 For now, the bottom sheet with Compose is a nightmare. You need at least the documentation to create a bottom sheet, sometimes blog posts to know how to handle complex navigation, because you are forced to use a BottomSheetScaffoldor a ModalBottomSheetLayout which aren’t trivial components.

The equivalent in SwiftUI is just a decorative call on a component which takes a boolean value to know if it should show or not the bottom sheet. Super simple, don’t need to check any documentation, only one call on a screen component. I didn’t had to check the documentation to create this user experience and it worked directly without any issue.

SwiftUI implementation to display a sheet.

In my application, I created a form where the user can insert a first name, last name, email address and a company. With that, I generate a QRcode which respects the vCard standard to share personal data between participants at the event.

With Compose, I can create filled or outlined text fields to display a form but if I need to combine visually text inputs or separate them with sections, I need to make it manually. That was my first approach with SwiftUI but after a little research, Form and Section help a lot to build a form with the correct look and feel and user experience.

SwiftUI implementation to build a form

Yes, SwiftUI is a good library but it’s not perfect. In my opinion, there are two big pain points when you develop with this UI framework.

This approach is better because you can build components with a fixed contract without any dependency between screens. Your component doesn’t know that if you click on a button, it’ll start a new screen. Due to this, you can easily share your components in your code base or across applications.

It is also easier to initialize a ViewModel for your screen components if you can pass it from the top level of your application rather than sharing repositories through all components until it reaches a NavigationLink which will use it to create a new screen with its own ViewModel.

Moreover, SwiftUI isn’t open source and I don’t understand the reason for that. I check the Compose source code all the time to know how it is built inside the library to do the same, or similar, or for inspiration. When you want to check the SwiftUI component source code, you can find only a header file without any additional information.

Fortunately, there is the hacking with Swift website to help you when you are blocked but it should be done by Apple teams to avoid obsolete documentation in the future.

Is SwiftUI better than Compose? In my opinion, yes and no.

One thing that is certain is that SwiftUI is easier to use than Compose because Apple teams build the framework to respect iOS platform only without the perspective to use it with other platforms.

If you think it is a good idea to use Compose for both Android and iOS, I’ll probably disagree with you. It is important to respect UI/UX guidelines of the platform and Compose can’t build an application like SwiftUI does.

But design decisions made by Google teams aren’t bad either. Even if it can require more code than SwiftUI to create an interface, it is less than the XML approach and like the father of Compose (Jim Sproch) said, “it leads to better code quality and a more vibrant ecosystem”.

This article was originally published on proandroiddev.com on March 21, 2022