Today we will figure out how to manage your build scripts more efficiently, avoid boilerplate and code duplication. We will cover two major topics: dependencies management and common configuration control.

This article was inspired by the Now in Android app. You will notice during reading this article that many parts of our examples will appear very similar. We will follow the main idea and add some additional comments and explanations. I hope you enjoy the article, so let’s begin. 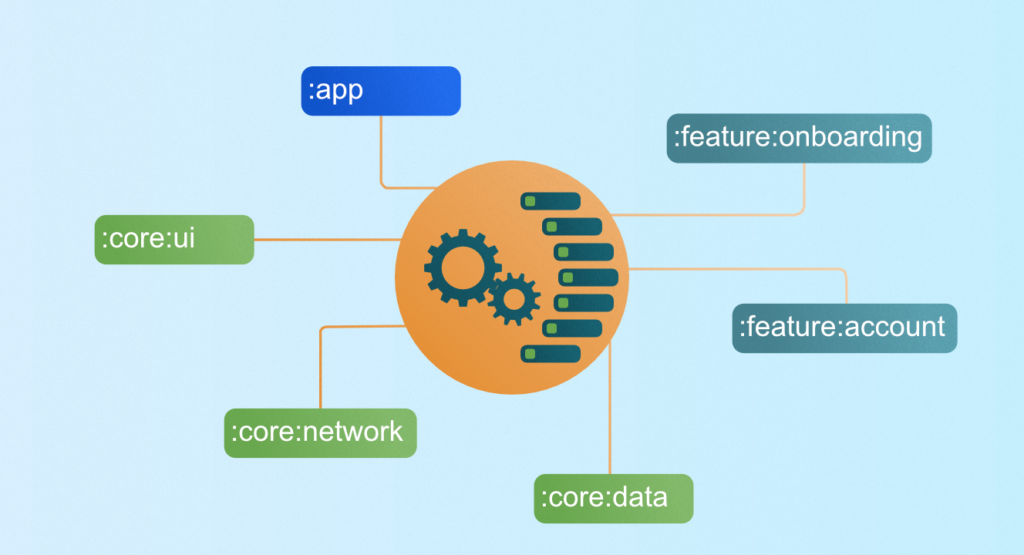 We will start by creating a new project and analyzing what we have in our build files. The picture can be slightly different, but you have probably already seen something like the following code snippet in your application build file. The plugins section, which contains information about using plugins, is nothing special, just a compact part:

The dependencies section is the most changeable. In the starter project, it is somewhere between the plugins and android parts:

In cases when you have more than one module, it is highly recommended to use a version catalog.

A version catalog is a list of dependencies, represented as dependency coordinates, that a user can pick from when declaring dependencies in a build script.

We will not go into detail in this section because there are a lot of very detailed articles, such as this one. Instead, we will briefly cover the most relevant steps.

So, let’s add a version catalog to our project. First of all, we need to create a TOML file under the gradle directory and fill it with the required dependencies: 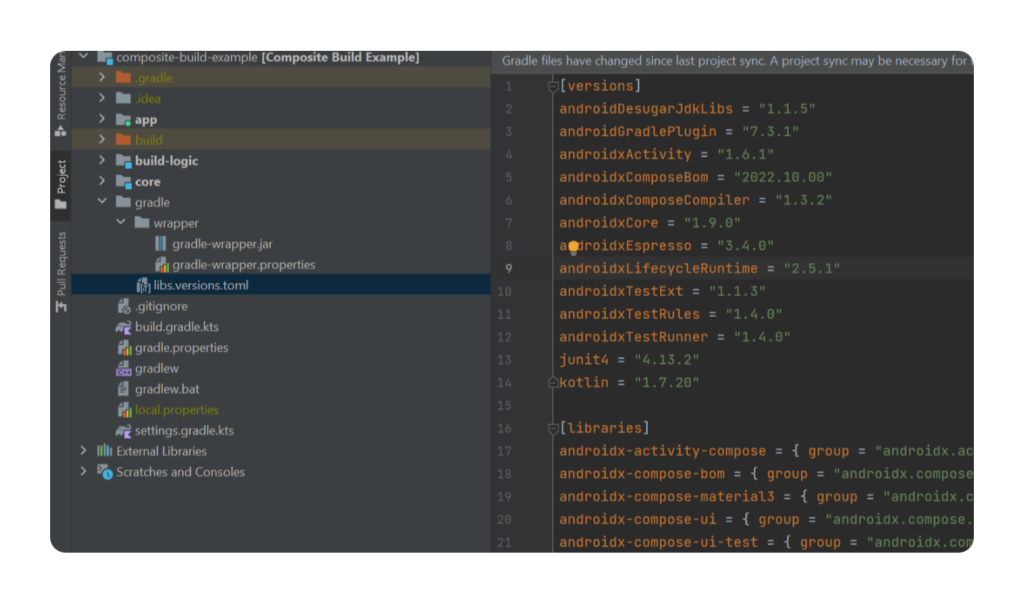 If a libs.versions.toml file is found in the gradle subdirectory of the root build, then a catalog will be automatically declared with the contents of this file.

If you want to place it in another place or name it differently, follow the official instructions.

The structure of TOML file is very simple and consists of 4 major sections:

In addition, to take advantage of all the features of autocompletion, we will migrate all our build script files to Gradle Kotlin DSL.

After changing our app module dependencies section will look as follows:

Now the dependencies section looks much better. If we add a new module, for instance :core:ui, we wouldn’t need to control library versions separately. All that we need to do is update the versions in our libs.versions.toml file.

When we will start using TOML files, Android Studio stopped showing us expired dependencies. The solution here is to start using one of the tools to control dependencies updates such as Renovate or Version catalog update plugin.

Let’s go back to our android section and analyze what we have in it.

One of the most effective solutions is to start using a composite build approach.

Why not a buildSrc? The answer is simple and based on official documentation:

A change in buildSrc causes the whole project to become out-of-date.

The Gradle team works on this problem and has the plan to make buildSrc an included build, but now it isn’t.

First of all, we need to create a new project inside our main project. Let’s name it build-logic: 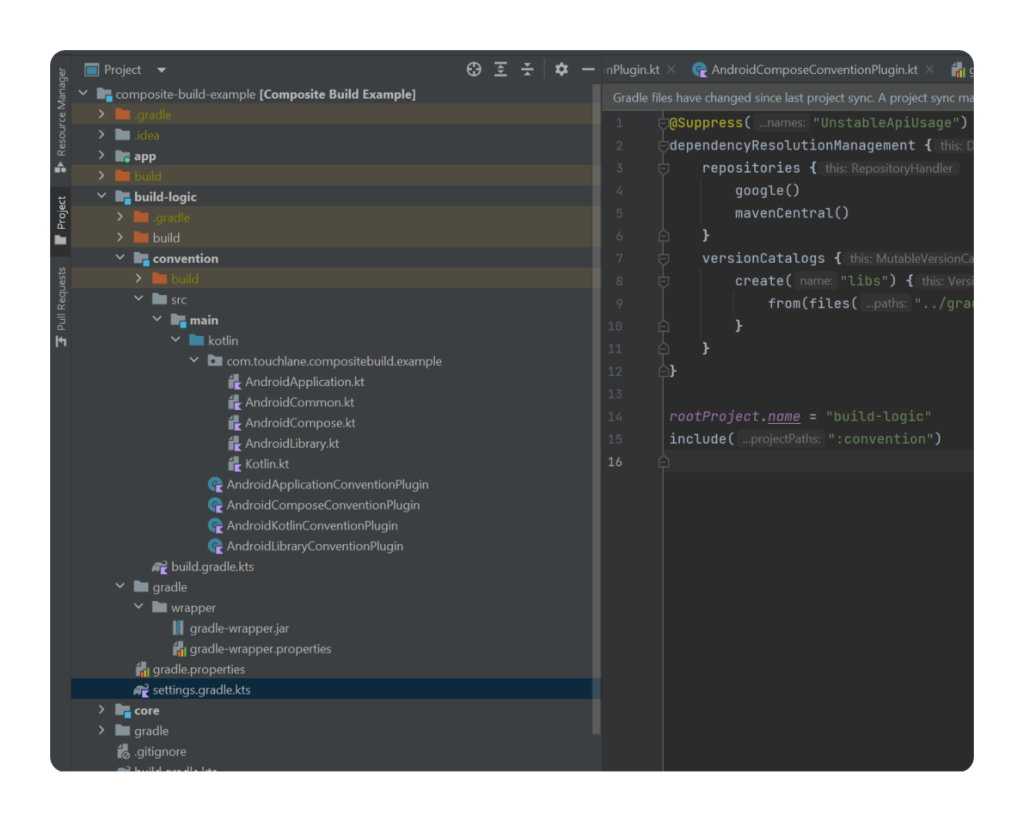 In our project, we will use the same TOML file as in our main project. To avoid duplication we can specify a direct path to the TOML file and use it. Additionally, we need a module to put all our logic. Let’s call it a convention.

The build.gradle.kts looks pretty simple with minimal required parameters. We are interested in the plugins section under the root gradlePlugin section. It’s the place where we register our custom plugins. The main idea is to move common parts from application build.gradle.kts to a specific plugin. This approach helps us achieve a single source of truth for our modules.

Following the single responsibility principle, we will split logic into very small atomic groups that will cover specific cases.

So, let’s take a look at what we have. We have the plugin that applied to the project. In the apply section, we have 2 subsections. The first one is:

For that reason, we split the codebase into 2 methods (actually 3 if we consider working with the com.android.library plugin), configureAndroidCommon:

As you can see we moved a lot of stuff here. That means that you don’t need to have this code in your newly built and existing modules. Only targetSdk is not available to configure our app, and the solution is the configureAndroidApplication method:

Finally, we need to include our build-logic project in the app build pipeline. To do that we need to add the following code to the application-level settings.gradle.kts file:

Here will be the most interesting part — we’ll replace blocks in our application build.gradle.kts file with our plugin and check how many lines of code we reduce.

And the impressive part, we can reduce the android section to these lines:

Let’s define another plugin and move the Kotlin setup into it. We’ll start with creating a plugin class:

Here you can see that it looks slightly different from our AndroidApplicationConventionPlugin plugin. As we noticed before, the extension type depends on the type of plugin you use. For android applications we use the com.android.application plugin and we have access to ApplicationExtension. On the other hand in our modules, we use com.android.library and in this case, we have access to LibraryExtension. For that reason, we need to handle each case because highly likely we will use Kotlin in the whole project including modules.

Move all related logic into the configureKotlin function:

Register our plugin in our build-logic project:

And finally, replace all related code in our application build.gradle.kts file:

Just compare it with our initial version. We reduced from around 47 lines of code in our android section to around 25! In addition, as a bonus, we create a single source of truth for our project.

You can notice that we don’t have com.android.library plugin implementation yet, so let’s fix that. First of all, we create a plugin class:

Don’t forget to add our plugin to the build-logic project:

And let’s replace the content in our module build.gradle.kts:

As you can see we have reduced the code in this part a lot.

As we mentioned at the very beginning of this article you can move anything to your plugin if it helps you reduce boilerplate and improve maintenance. For instance, we can also move parts related to compose:

Again, configureAndroidCompose is applied to 2 types of extensions: ApplicationExtension and LibraryExtension. It is also possible to create 2 separate plugins for ApplicationExtension and LibraryExtension e.g. AndroidApplicationComposeConventionPlugin and AndroidLibraryComposeConventionPlugin but in our example, we use the approach described above. And here is our configureAndroidCompose method:

Pay attention that we can also add some dependencies. As we move compose logic to a plugin, it makes sense to add dependencies to the BOM of compose to reduce dependencies in the application’s library section. Register our plugin in the build-logic project:

And replace the compose-related part in our application:

Additionally, we are reducing our dependencies part:

Congratulations, now you know how to make your work with build files more productive and maintainable. You can always add your custom logic to plugins to reduce the repeatable work that you do when creating a new module. As a developer, you and only you decide what part of the code goes to the plugin, and here are a few really useful examples for you to explore.